Watch the video to listen to the interview and see photos from the 2016 Pilot Project in Baker Lake:

You can also listen to the audio only version of the interview below:

Qavavao Peter: Well finding a job can be tough if you’re leaving school or re-entering a job market. Five communities in Nunavut will have training programs for people looking for work. A consulting group is offering pre-employment training and it comes with a participation payout. Erin Strachan is the manager of the PMC Pre-Employment Training programs, she joins me online from Ottawa. Good morning, Erin.

How are you doing?

I’m doing great, and you?

I’m doing good, thank you. So, what exactly is pre-employment training?

I work for an organization called Performance Management Consultants and we got funding last year from Department of Family Services to go up to Baker Lake to run a pilot project there in pre-employment training. I guess you could say pre-employment training is everything that somebody would need to know in order to find a job and keep a job. 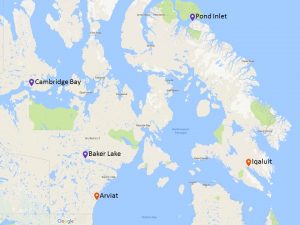 And why is pre-employment training necessary? Why not just offer training for specific jobs?

I think a lot of Nunavummiut who face barriers to employment, some of them have never worked before or they’re re-entering the job market after a long period away. There’s a need for them to develop skills and confidence and get some work experience so that they feel ready to take on the next job for them.

In Baker Lake, we had 16 participants and they ranged in age from 18 to 57. We taught them things like basic workplace communication skills, how to develop a cover letter and resume, how to network with potential employers… we did lots of things like site tours of potential work places and we even took them on a caribou hunt as a cultural activity. We’re really looking at a broad definition of work, so it might be going in to work at a store or going in to work at a government office or it could be traditional activities like hunting or fishing. In some way making a contribution to their community.

And there was a pilot project for this program in Baker Lake, what happened to those participants?

We had 16, and of the 16, we had six of them find full or part time jobs. We had three people return to school, one of them went to pre-trades in Rankin Inlet and two of them did the Inspire Nunavut program. Seven of them applied to do the PASS program to get their high school because of our 16, we only had one who had completed her high school. So, for us, a really successful outcome would also be if the participants decided to go back to school to further their education.

How does this program keep students engaged?

Well, I think one thing we’re doing is building a very positive learning environment for the participants. A lot of them haven’t experienced or haven’t had that opportunity in the past, so I think that’s engaging for them. Including the cultural activities, having local culture teachers coming in. We had an Elder come in and speak to the class in Baker Lake. We had a couple of Elders, actually, from the community. And we also took them out on the land and I think they found that very engaging. We helped them to do some goal setting. Which I think they really enjoyed. That’s setting goals in personal, professional and financial areas.

We also worked with a group of people in Baker Lake to help offer support because they were working to become a registered society in Nunavut, and their goal is to open a thrift shop that has the potential to become a food bank also in the future. They just received their society papers, I think two weeks ago, and they’re calling themselves “Abluqta”, which I think means “Leap Forward Together” in Inuktitut. So, we’re working with them also.

There’s a potential in each of the communities where we’re going to be, for the participants to work on an experiential project. It could be raising money for a local initiative, it could be throwing an event for the community. Something that the participants will decide on and then work together to achieve in the program.

Most of the programs are 12 weeks long this fall, but Iqaluit will be actually a 22-week program ending in March.

And the two youth projects we have in Arviat and Iqaluit, they’re also going to have the chance to do participatory video as one of the course modules, where they’ll be learning how to operate video equipment and create a documentary, something that is of interest to them, and edit it so that it can be made into a documentary.

Yes, we’re going to be putting out a call for participants relatively soon. Probably look for that the first week of August. We’ll put up posters and we’ll be putting announcements on Facebook. Maybe we can even put it on the radio when the announcement goes out. And then people can just fill out a one-page application form which we will leave with a career development officer or somebody in the community so they can fill that out. And yes, participants will get paid an incentive to participate and then there will also be a completion bonus. So, if they finish the entire program, they’ll get a nice bonus at the end of it.

We encourage Nunavummiut that are listening and interested, those that are either youth or people who face barriers to employment, to apply.

Alright, thank you Erin for having the time to speak with me this morning.

Thank you very much for having me.

That was Erin Strachan, manager of the PMC Pre-Employment Training programs. These programs are offered in five Nunavut communities this fall.